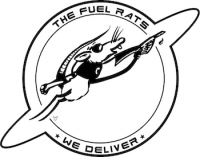 Nice one: I just heard that the design I made as a decal/logo for the Fuel Rat player group in the visionary Sci-Fi game Elite: Dangerous will now be produced as 4'' PVC badges, and will also be taken to Lavecon by fellow Rats.

This is one of those nice things that refuel the energy cells for everyday work.
Defined tags for this entry: design, elite: dangerous, fuel rats, grafik, graphics, logo, science fiction

Donaldson has become popular with his strange novels about Thomas Covenant, a man who has Leprosis yet earns power by some kind of magical ring—which burns him up when he uses it. With the Gap series, Donaldson delved into Science fiction. Yet the five novels are not set in the visionary style Science fiction that, for example, Stanislav Lem excelled in—or, to quote more recent authors, Stephen Baxter or even Andreas Eschbach with "Quest".

In this respect, there is not much to see. Donaldson creates a handy pocket universe with a need-to-know level of technology. Gap is the hyperspace jumping ability, tech standards resemble today followed up just a bit into the future. Armaments range from matter cannon and super-light proton cannon [sic] to singularity mines and torpedoes, without much further elaboration. The one alien species is well chosen and characterized yet not specifically visionary. Taking all together, Donaldson invents a setting that just fits his needs for a good stage. This is indeed what the Science fiction aspect is all about in the Gap series: It is "just" the stage for the play.

The really important thing for Donaldson are the characters. Here he excels greatly, overshadowing other science fiction writers, including the above named, with ease. As with Covenant, we, again, meet persons who wield extreme power, yet are constricted by both physical as psychical restraints that torture them to the extreme. At the same time, Donaldson manages to create factions on all sides with inner conflicts that make snake pits look like a sunny holiday beach. Those who are on the same side quarrel with each other, up to the point of wanting to kill each other any minute yet can't do so: The focus lies on the interpersonal relationship between people who absolutely loathe, rape and torture each other to no ends, while at the same time being bound to rely on, support and rescue each other. Even those who are innocent are laden with guilt, unable to free themselves from the bonds that hold them. And so even the most vicious, ruthless, hateful, almost purely evil and combat-wise near-almighty character Angus Thermopyle does not only have the guts to claim that his victims have earned no right whatsoever to judge him, but is supported in his claim by his victims themselves.

At the same time, the protagonists remain real—when Ensign Morn Hyland claims command of a ship of battle, she soon hits her limits since she might have an incredibly strong will yet lacks experience in command itself. Her strong counterpart remains strong accepting defeat, thus showing that this counterpart is not just an artificially strong "fight to the death" personality but can indeed stand up for it.

Donaldson brakes and turns his characters with such force and at such a high frequency that it really hurts reading, pushing each one of them to their extremes, questioning everything one might take for being just. He presents a near-unequalled brilliance in this respect, a fury of emotions clashing with reason, humanism and raison d’État. While he also uses plots and schemes as some kind of tool (a bit like the stage itself), his focus lies clearly on the torn protagonists themselves with their aims, feelings, and bonds. Great reading. And what are novels about, if not about human relations, strange ways of thinking and characters?

On a side note, I hit that was Swedish, sorry found the complete Gap series in an "open library" at a bathing place in Sweden: Take it and leave other books ins return. (Oh, and if anyone thinks "oh those are old books, why bother", then one has really no idea whatsoever about literature.)

Incredible WARNING!!11!
This page uses cookies. Also, please note that coffee may be hot and for sure some people are way overpaid. If you can't accept our cookies, please leave now. Thanks.
⇒ Read more
⇒ Details for EU ballpoint pen seniles.